HCL Tech share price gained over 3 per cent in early trade to emerge as the top Nifty gainer. The buying was buoyed as the country’s third-largest IT company reported better-than-expected results in the July-September quarter. The counter made an intraday high of Rs 989.05, gaining around 3 per cent at 10 AM, the scrip was quoting a price of Rs 974 apiece on the NSE and BSE. 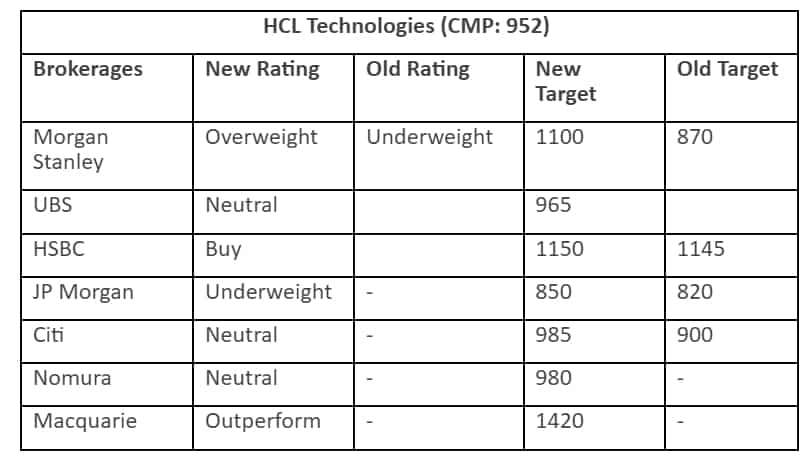 Also, the Board of Directors has declared an Interim Dividend of Rs 10 per equity share of Rs 2 each of the Company for the Financial Year 2022-23. The Record Date of October 20, 2022, fixed for the payment of the aforesaid interim dividend has been confirmed by the Board of Directors. The Payment date of the said interim dividend shall be November 2, 2022.

The country’s third largest IT company posted a 7 per cent rise in its consolidated net profit for the September quarter at Rs 3,489 crore, topping street expectations, and raised the full year revenue guidance citing strong demand and deal pipeline despite macro concerns.

Amid widespread fears of global recession, HCL Tech said it clinched a “stellar quarter on all fronts”, delivering strong performance in top line. The IT services firm exuded confidence about its near term and the medium term growth, as it uppped revenue guidance to 13.5-14.5 per cent for the full year, against the 12-14 per cent growth band projected earlier.

“We remain very positive of near term growth and medium term growth. This confidence is coming from the booking that we had in the first half of this year and also the quality of pipeline that we have for the remainder of the year,” HCL Tech CEO C Vijayakumar told reporters at a briefing.

The confidence is in line with the spending patterns and trends that the company sees in the market, Vijayakumar said, adding that typically during difficult economic environment, technology is seen as an “enabler” and mission critical and transformation deals that reduce costs are prioritised.

The revenue for the three months ended September 30, 2022 came in at Rs 24,686 crore, 19.5 per cent higher than the same period previous year and 5.2 per cent higher sequentially.

The company won 11 large deals – eight in services and three in products.